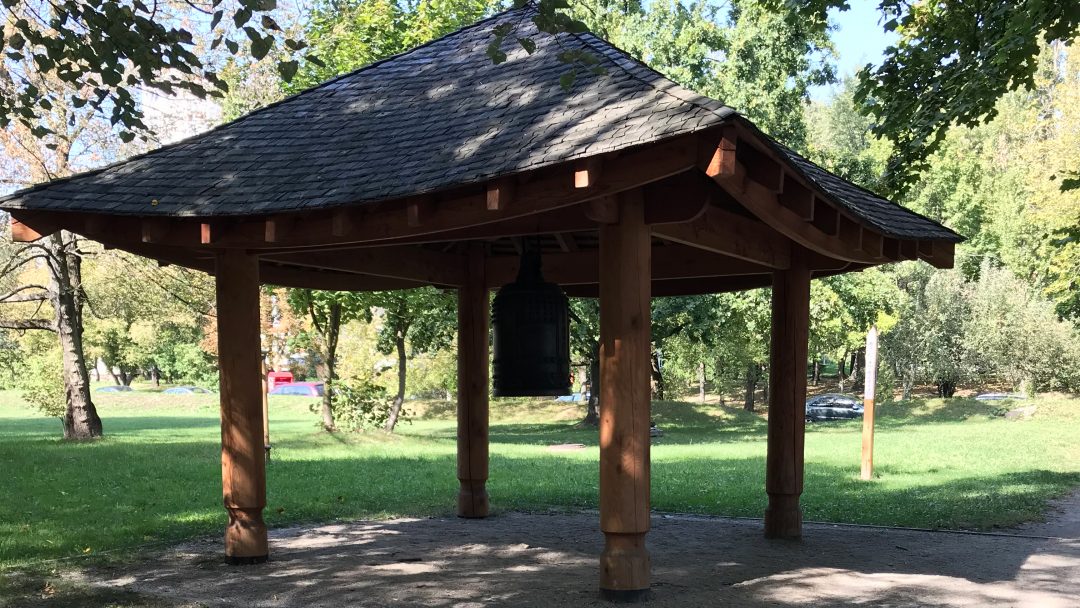 The Polish Peace Bell arrived from the the World Peace Bell Association in 1989 as a gift from Hiroshima and Nagasaki to Warsaw. Jacek Kozlowski became involved about 1990, when he began his work in Polish Peace Coalition as President.
Since that time, there have been many ceremonies held around the Peace Bell. In 1991 representatives of the Polish Peace coalition met with representatives of The World Peace Bell Association from Japan. The Coalition was appointed a representative of World Peace Bell Association in Poland. In September 1991 the Mayor of Warsaw dedicated a Peace Pole near World Peace Bell. Unfortunately, in the year 2002 the Polish Peace Bell was stolen.
From initiative of local community and with the support of Warsaw Mokotow  District Authority a new Peace Bell arrived from Japan in September  2015. In September 2016 the Mayor of Warsaw Mokotow District together with  the Ambassador of Japan dedicated a Peace Pole (a gift from the Heiwa  Foundation) near the new Peace Bell. In September 2017 the Mayor and the Japanese  Ambassador planted tree for Peace (gift from the Heiwa Foundation) near the Peace  Bell. This year again on the occasion of the International Day of Peace we  organised a ceremony to ring the Peace Bell.
The Heiwa Foundation have a project to create a modern Japanese garden around the Peace Bell. As a main organiser of International Day of Peace in Poland, the Heiwa  Foundation cooperates with local authorities in various places, Japanese  Embassy, United Nations Information Center in Warsaw, Urasenke Society  (Traditional Japanese Way of Tea) in Poland, Umemi Foundation (Japanese  Archery), Goi Peace Foundation in Tokyo (www.goipeace.or.jp/en/)  and many others.
The key action of the Heiwa Foundation is to promote this message “May Peace Prevail on Earth” by dedicating Peace Poles. There are more than 30 Peace Poles located in Poland.
This year (2018) they dedicated one in Jezow Sudecki Airport, a High School in  Jelenia Gora and Karate Dojo Stara Wies. The aim of the Heiwa Foundation is to promote peace education, to promote a Culture of Peace, to undertake research about peace, cooperation with the UN, and to promote international cooperation for peace and freedom.
Jacek Kozlowski travels to Japan every year since 1995 and cooperates with  many groups and people in Japan to promote the Culture of Peace. He  participates in many international conferences in Europe and Japan. He would like to invite all who would like work together and cooperate toward World Peace to attend Peace Bells and send their message of Peace to the World by ringing the Bell.
Thanks to Jacek Kozlowski President of The Heiwa Foundation for this update from Warsaw.

The World Peace Bell was initially installed in 2002.